From 29. to 31. January we organised with great success a house exhibition, which found great favor with more than 200 enthusiastic visitors. The newest technology was shown with professional guidance and completed with interesting lectures.

The number of employees growths to more than 30 persons.

Expansion of the construction department and of the CNC production line.

Start of a construction department with Mr Seidel.

Enlargement of our product range by incorporation of Friedrich Wenz company.

Enlargement from the CNC-Production.

Purchase of an mechanical equipment for processing electrodes. Our staff has once more increased.

A retirement party is held for our founder, Reinhard Bittner, who is going into well-earned retirement after 30 years of self-employment. Thus, the generation change comes full circle at WMA Schmidt & Bittner GmbH.
Andreas Bechtle is now sole managing director and member of WMA.

Purchase of a new-technology bending machine for the precision bending of shafts (pinoles) and electrode arms up to a diameter of 70 mm.

expansion of our business Europe-wide. Our staff has now increased to over 20.

We move into the newly-built, large extension, which also houses a testing laboratory. A service center for the repair and maintenance of all types and makes of resistance welding machines is set up.

the quality management system in accordance with DIN EN ISO 9002 is introduced.

The company changes from an OHG (general partnership) to a GmbH (private limited company). The company is now called: WMA Schmidt & Bittner GmbH 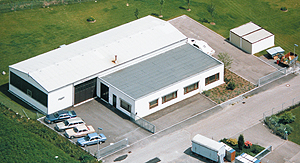 it became increasingly clear that our business as suppliers of individualised solutions, in addition to standard articles, could only be sustained if the production and warehouse areas were expanded.
A new manufacturing facility has to be built. The new location is to be Ilsfeld-Auenstein on the A81 motorway (Heilbronn-Stuttgart) with its proximity to a well-developed infrastructure.

a small production section for the conversion of welding machines and the manufacture of special electrodes in accordance with special customer requirements was added to the trade company. Five employees were hired.

Foundation of the company in October 1969